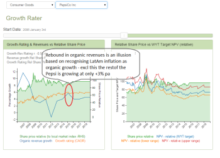 Pepsi’s reported organic revenue growth has been edging ahead all year and for Q3 it was up at +7.4%. For the purveyors of the black teeth rot, this was impressive, particularly since underlying sales volumes were up by only +1% globally. A quick look at the details however provided the answer with ‘organic’ revenues up +33% at its Latin American operations, notwithstanding collapsing currencies left the reported figures from this region down by -5%. As these operations account for approc 14% of group sales, this therefore contributed +4.6ppts of the +7.4% of group organic revenues, thereby implying the remaining 86% of the group grew organic sales by only around +3.2%.

Have the Latinos given up the hard stuff for soda’s? Well looking at the +1% volume increase from the reason, no. The reason it seems is more mundane in that Pepsi was able to harden its local currency pricing to reflect falling domestic exchange rates and rising inflation; a feature that is also noticable amonst other connsumer groups in the region, including the auto manufacturers. This boost to ‘organic’ revenue growth for Pepsi and others is therefore merely an inflationary impact from one of their markets and given the developed markets conditioning for low inflation, if not deflation, can prove seriously misleading if used as real measure of underlying performance for the group.