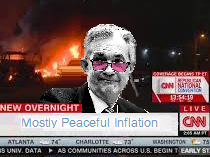 Jerome Powell seems eager to talk the talk on tackling inflation, but has yet to walk the walk. According to his 4 May published plan, the initial reduction in the Fed’s balance sheet should have kicked off at approx $47.5bn per month from 1 June, rising to $95bn per month by September. However, in the first half of June (to 15 June) the Fed has instead actually increased the size of its assets by $18bn. So has the Fed again been spooked by a hissy fit in equity markets, or can we expect it to cut its holdings by at least $58bn over the remainder of June to get itself on track. If not, then what credibility can currency markets have in the future direction of the USD? Looks like an interesting couple of weeks ahead for markets!

Listening to all those central bankers now extolling sound money and responsible monetary policies is akin to a prostitute professing to have discovered God, but only after being caught in ‘flagrante delicto’ with the bishop.  Having made little secret of using misdirection (lying) to manipulate markets, the current protestations by central banks to tackle inflation therefore rank somewhere around that of the boy that cried wolf as to both their sincerity and credibility.  So while talk is cheap, it is actions that count as to which path markets will believe the US will now take.  Will it keep printing to ease the short term pain on asset prices and attempt to sustain what has become a centrally planned market, or allow the long overdue return to the market pricing of capital, with all the accompanying penalties for the feckless?  But make no mistake, as inflation potentially enters a death spiral, such a decision may buy a little time, but ultimately will lead to a much worse outcome across all asset classes once the currency cracks. If in doubt, just look at what happened to Turkey when it tried to cut 5ppts from interest rate in December and the subsequent near 50% collapse in the Turkish Lira.

So this is what the Fed was promising in May 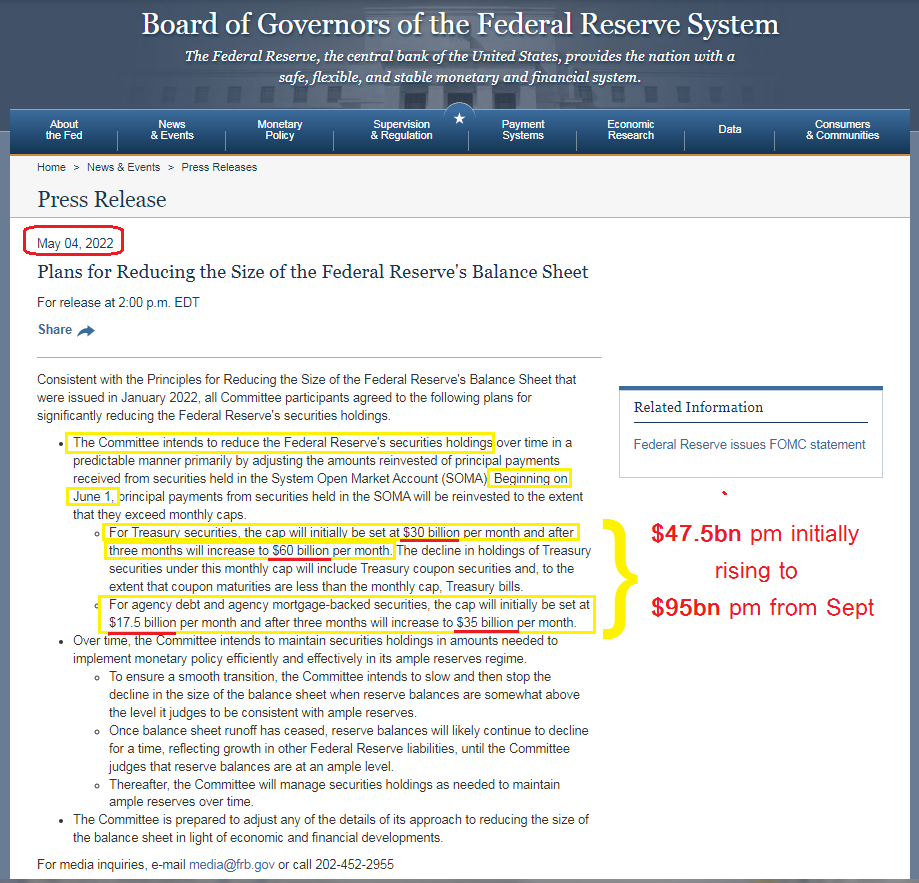 Big promises, but as of yet, just a bit of paper

This however, is what they have so far delivered up to the middle of June.  While asset purchases tend to be weighted into the start of each month, with sales usually falling into the fourth week, the initial weekly data to the week ending 15 June (out each Wednesday) is worrying, Instead of heading towards to planned monthly contraction of over $47bn for June, the trajectory in the Fed balance sheet is heading in completely the opposite direction, having expanded by $18bn over the first half of the month. That means, that to hit the target that it set for itself only a month and a half ago, it will need to cut its asset position by almost $60bn over the remainder of the month.

With the ongoing Federal deficit needing ever more debt issuance to fund, the simple dynamics of supply and demand should see such a move reflected in bond yields, unless of course more ‘war talk’ can be stirred up to encourage safe-haven investor flows into the USD. 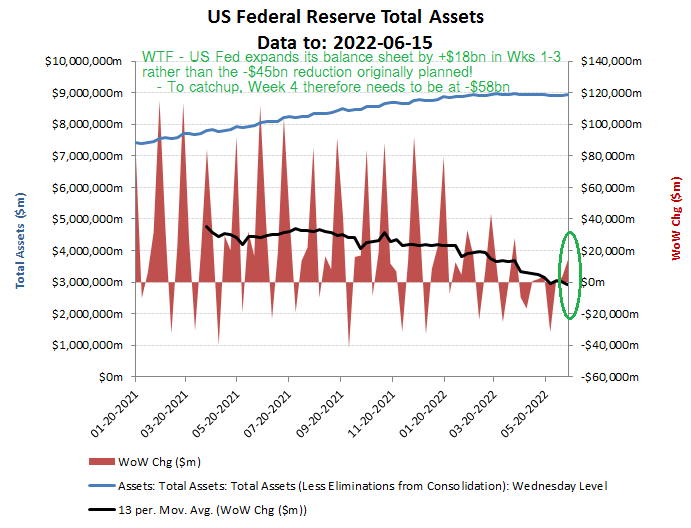 Hang on, June should herald the start of the balance sheet reductions