Milk prices go frothy, but at what margin implication for Danone

Are milk prices on the turn? Over the last month powdered milk prices are up another +10%, which means prices are over +30% up from their low point in May. For milk producers and consumers (such as Danone) alike the question is whether this represents an early indicator of a change in longer term price trends and whether this will remain isolated to powdered rather than raw milk.

What the below chart of milk prices (rebased to 100), both raw and powered, highlights are: 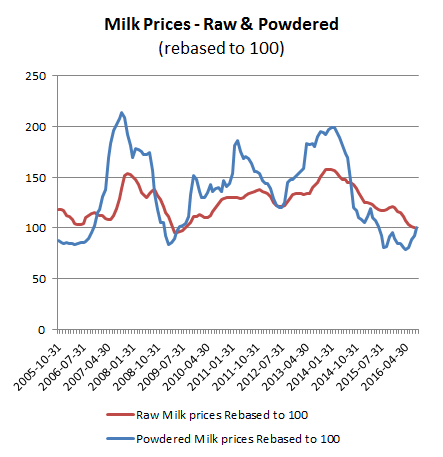 Powdered more volatile the Raw, but trends are aligned

Another conclusion from the data would be that rising milk prices should be inversely correlated to the operating margins of the substantial milk consumers such as Danone. Danone does not break out how much it spends on milk each year, but claims to consume 7.5bn litres annually which even assuming a healthy discount on the prevailing EU average current price of around €0.25/ltr would suggest somewhere in excess of €1.5bn pa (approx 6% of sales), and this probably doesn’t include powdered milk.

Mapping out these shifts in milk pricing against Danone’s margins suggests a close inverse correlation up to around 2014 (assuming a 1 year lag on contracts before permeating through to costs).  The relationship over the last two years however has not been so noticeable. Perhaps government controls to protect small European dairy farmers limited the full extent of the price decline and therefore the benefit to Danone. If so, then this would help explain the limited margin uplift over the last 18 months, but would also suggest an element of price cap to protect margins from at least an initial milk price increase. The problem with this explanation however is why would Danone sacrifice a margin gains on falling milk prices? Attempting to protect supply from its wide base of small farm suppliers might be one reason, but this could just as easily be done via larger and more economic producers. Where small farmers outgun the big suppliers though is in votes and if Danone has been protecting this powerful lobby group into the pricing downswing, one might therefore assume a political ‘quid pro quo’ might be expected downstream if the need arose.  Those with long memories might remember the abortive approach for Danone by PepsiCo back in 2003 and the political backlash that ensued. 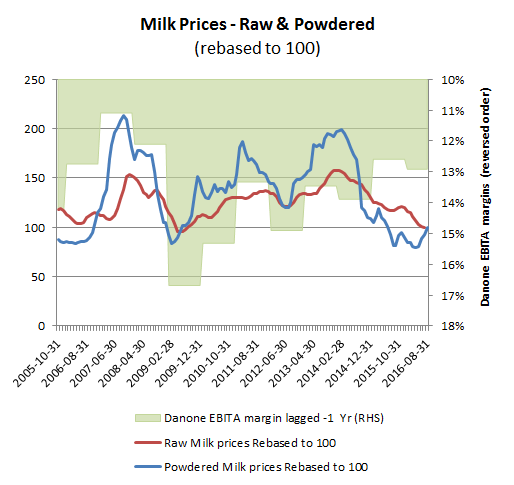 Margins inversely related, but only to a point!