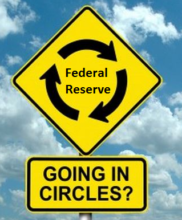 Another month and another non-farm payroll number for markets to chew on. After what is now looking to be an abnormal data point for May, private sector employment growth has now posted a second month of gains at over 200k. Stretch this out over a year and we are still talking an average monthly increase of approx +190k per month, regardless of whether you’re taking the adjusted or un-adjusted numbers. From the relative stability of this trend, along with that also for average income growth, it is somewhat surprising that an entire cottage industry has emerged to inspect these monthly entrails and judge whether these are a precursor to more MOAR (QE etc), or higher interest rates and the end of civilisation as we know it; or at least as financial markets seem to regard the prospects.  A second ‘good’ month of employment gains and income growth was clearly going to be taken badly if this means Yellen will finally harden rates, and currency markets duly obliged with the US dollar rising at the prospect and with gold and silver slipping.  One look at the below chart however, and one might wonder what has actually changed, because if the Fed was being data dependent on its interest rate policy it could have started to raise rates at any time in the last 4 years. As long as markets are happy to continue this pantomime performance of a threatened rate rise supporting the US dollar which in turn helps the funding of its intractable deficit, why should the Fed change course now? Unless of course it wished to collapse its partners in the UK, Europe and Japan, who are still trying to flirt with NIRP, if not ZIRP. 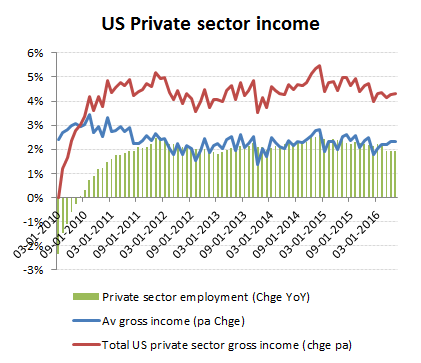 US employment – a steady, but modest growth trend

Total private sector income growth is again just over +4% YoY, reflecting a combination of employment growth running at around twice the rate of population growth and average hourly earnings up by around +2.6%.  While the official unemployment rate remains low at only 4.9%, this is flattered by the historically low participation rate of under 63%. The stability of the average income line also argues against an over-heating labour market as a harbinger of inflationary pressures that would  demand a policy tightening by the Fed. 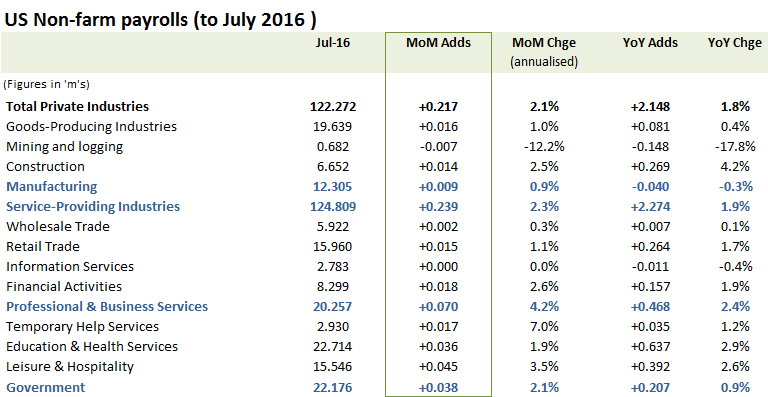