Procter & Gamble – Buying a defensive into a recession?

Leaving to one side the possibility that recessionary fears are being used as another ruse to monetise intractable deficits, the current round of recession fears have the “Buy defensives” brigade out in force.

One such stock that has been attracting such attention is our old friend Procter & Gamble. Back in 2008, this was also the investment narrative and at first sight would seem to suggest that you can make money buying into a declining revenue trajectory when it is diverging with the growth discount (rating). As it transpired however, all investors were doing was trading the perception rather than the reality and that those buying into the share price spike were substantially over-paying for growth; a price that has been paid in an under-performing share price ever since, or at least up to Brexit. 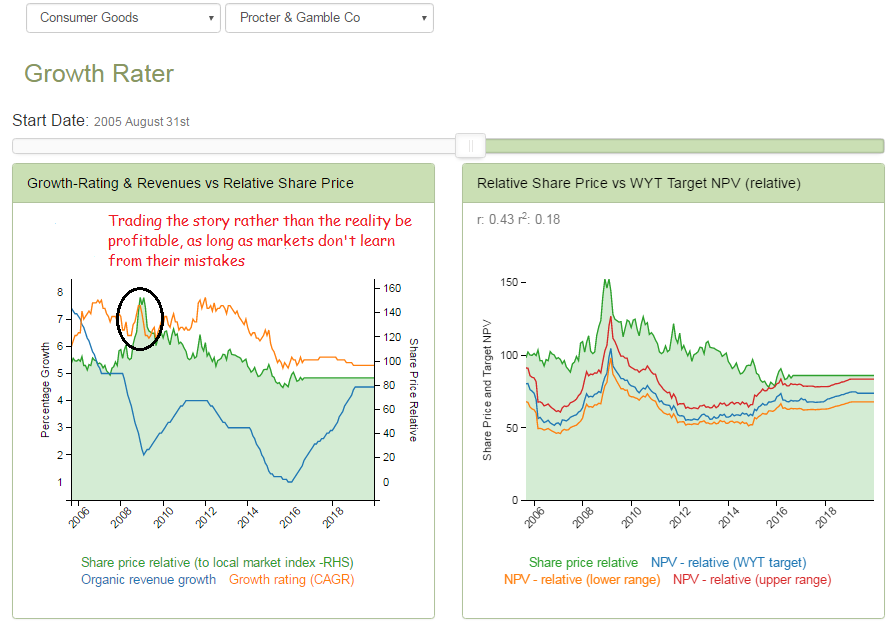 So what’s the play on the shares, the long awaited recovery of just another 2008 ‘defensive’ rotation?

Much as one might want to believe in the often repeated and much forecast recovery, P&G’s trajectory into FY17 remains lethargic with even with the paltry +2% organic revenue growth projected having to be supported by what are in effect are merely inflation offsetting price increases across some of its emerging markets, such as LatAm.  True, the implied growth rating being priced into the shares is not as exorbitant as it once was and at least the trajectory is at now positive, while EPS growth is predicted to grow by mid-single digits this year. This however is more a product of share buybacks, which although EPS accretive on a 4% OpFCF yield in these days of NIRP, are value destructive as they are trading shares discounting growth at over +5% CAGR for a business struggling even to hit the bottom end of our +2-4% pa target growth rating range.

We therefore seem to be back in 2008 again, with markets trading perception rather than reality and hoping not too many punters have learned from the last experience. This doesn’t mean that the shares won’t go up further, but that the game being played here is not valuation or earnings momentum, but  the bigger fool one. Looking at some of the market noise on the topic recently, not a lot seems to have been learned!

More on this can be found below and at: https://app.growthrater.com/