Markets don’t seem to like Facebook.
Those with access to the mean reversion analysis in the GrowthRater WebApp will be aware of the systematic relationship between organic revenue growth for these super-normal ‘growthers’ and how far out markets are reaching out to revert the growth rating and OpFCF yield back a market average. While also applying for Facebook, the noticeable feature (and a long-standing one) has been a considerably more cautious approach has been adopted by markets. While its sustained top line outperformance has started to bring the relationship more in line with its peers, the valuation horizon is still struggling to break above 30 months (see below), rather that the nearer 40 months being awarded to the likes of Amazon, Alphabet, PayPal and JD.Com for often weaker and more erratic rates of organic revenue growth. 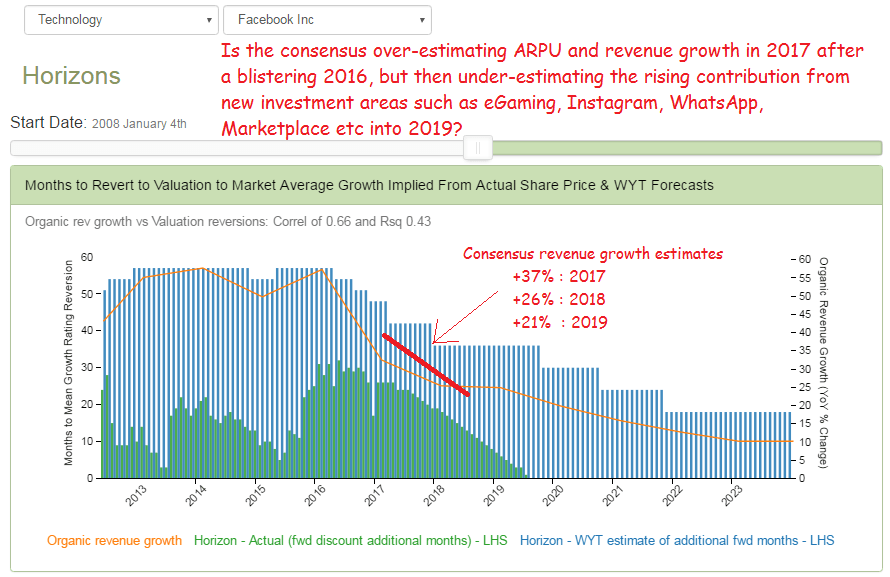 In part, this may just reflect some of the many concerns that has dogged sentiment with Facebook, ranging from phantom users to click farms and less than reliable consensus forecasts. Those with fat fingers and a small iPhone like me who keep accidentally clicking the intrusive mobile adverts when trying to scroll down a page, or those paying for them experiencing a rise in bounce rates may also experience a sense of frustration at seeing this reflected in surging quarterly ARPU and revenue growth statistics. For these latter groups, rising clicks, but falling conversions means it’s time to review marketing budgets and allocations, which Facebook seems to be referring to a slower Ad loadings and a “meaningful” slowdown in advertising growth into the current year. Having made a similar warning at the Q3 results last year, but followed this with another blistering performance in Q4 however, consensus forecasts imply Zuckerberg is crying ‘wolf’ by assuming a relatively modest decline in revenue growth into 2017. Drop this revenue assumption through the OpEx guidance and it’s easy to see how consensus EBITDA forecasts might be way too high this year.

Timing on the stock therefore could prove critical. Consensus forecasts look too high on revenues and margins for 2017 and while this seems to have been already largely recognised by the market’s pricing of the stock (even on my sub-consensus estimates), I would rather not buy ahead of a downgrade, particularly when I can’t gauge better where and when the low point in top line growth will be this year. As we get into 2018/19 however, the consensus forecasts for a steady erosion in revenue growth also look wrong, but possibly the other way as the new investment opportunities start to kick-in and be monetized. With this pipeline including such major developments as WhatsApp, Instagram, eGaming and Marketplace amongst others, we may be looking for a deeper and more extended trough in 2017-18 than the consensus is modelling, but a stronger trajectory into 2019 and beyond. From a GrowthRating perspective this is excellent and would support pushing out the mean reversion horizon with substantial positive implications for the valuation. We therefore await the next couple of quarterly reports from the group with considerable anticipation and a little trepidation.