Brexit countdown – modelling a ‘what if’ using ITV as an example 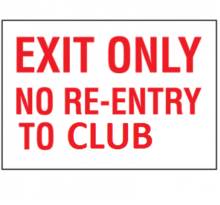 Only four trading days to go before the Brexit vote, so if you believe the current polls are more accurate than for the Scottish referendum, you are probably already underweight or short Sterling, UK Banks and groups exposed to UK domestic consumption (advertising, retail, hotels & restaurants, property and even some German auto manufacturers etc) and particularly those with high fixed cost structures. If you’re following the bookies with their odds suggesting a 55-57% ‘Remain’ probability with another success for ‘Project Fear’ however, then you may be looking to take advantage of some of the heavy share price falls ahead of this vote, albeit watching nervously for any last minute news-flow that may skew this. In the second part of this blog, I’ll look at some of the recent market impacts relating to this vote, but first I want to show you how you can easily model these changes in economic outlook on stocks you may have, or considering to have in your portfolio.

As a structured valuation system the GrowthRater measures revenue and valuation volatility through the economic cycle and makes this transparent to users. This means you get to see the margin of error on revenues which will help quantify the possible change in revenues to expect. Punch this into to the ‘Sensitivity’ tool and it will instantly revalue the stock price targets under those assumptions as well as provide you with a measurement for valuation volatility. Sometimes a valuation is less important than knowing the level of risk on a stock, particularly if you are facing a high stakes impact from a closely matched outcome such as this Brexit referendum.

By way of example I am going to look at the leading UK commercial TV broadcaster, ITV. With around 60% of revenues generated from advertising and 70% of EBITA from its broadcast activities, it is an efficient proxy for business confidence in UK consumption. While up over +5% pa over the last two years, its net advertising revenues are currently running unchanged YoY over the first half of 2016 as advertisers pull budgets ahead of the Brexit vote. Including studio content, I am forecasting overall organic sales growth for FY16 is on track to slip back to around +2%, broadly in line with its 10 year trailing average of +2.2% pa. Of relevance to the current exercise is not just this average, but the volatility of outcomes for revenue growth, which on a 0.95 confidence coefficient is a range of -1.0% to +5.3%, with a margin of error of plus/minus 3.2%.

Range and volatility for organic revenues and GrowthRatings 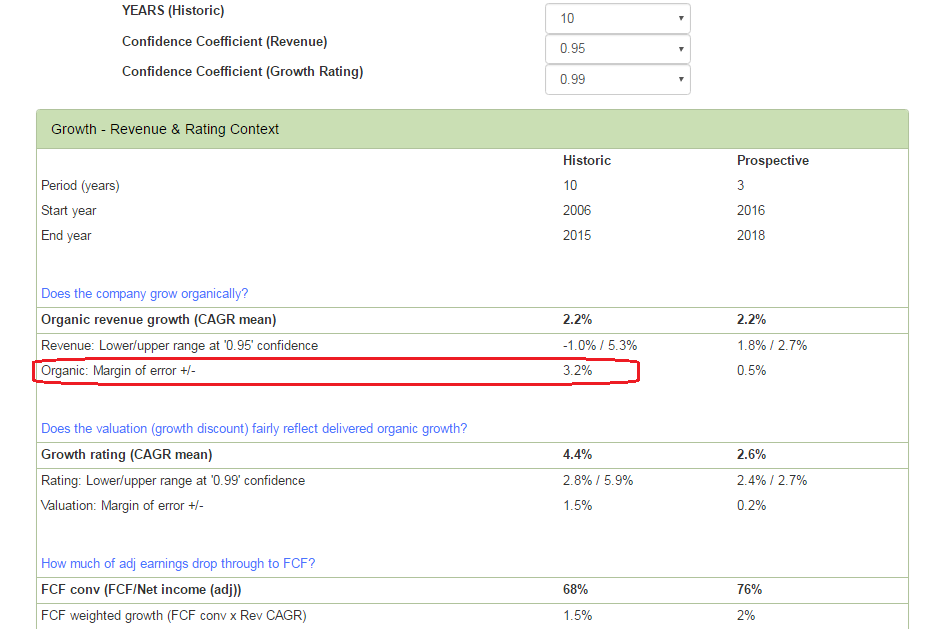 Margin of error on revenue forecasts of +/-3ppts

So to recap, from just ahead of the Brexit vote, I am forecasting current year organic revenue growth for ITV to revert broadly back to the group’s longer term trend growth rate of around +2%, while recognising a natural margin of error of over 3ppts either side of this is possible. Indeed, given the perceived negative impact of a ‘Leave’ result and the deferral in advertising budgets already seen, this would not be an unreasonable assumption to tap into the GrowthRater ‘Sensitivity’ matrix.

First however, a word on our base case valuation assumptions. As can be seen from the table below we are valuing ITV on a blended growth rating range of approx. +2% to +4% (including 0%/+3% for Broadcasting and +5.5/+6.5% for content), with our current target growth rating . With organic growth trailing the current target growth rate is in the lower half of this range at +2.5% with a target Op FCF yield of 7.4%. On this we get an NPV of just over 200p per share for the stock, rising to approx. 215p by FY2. 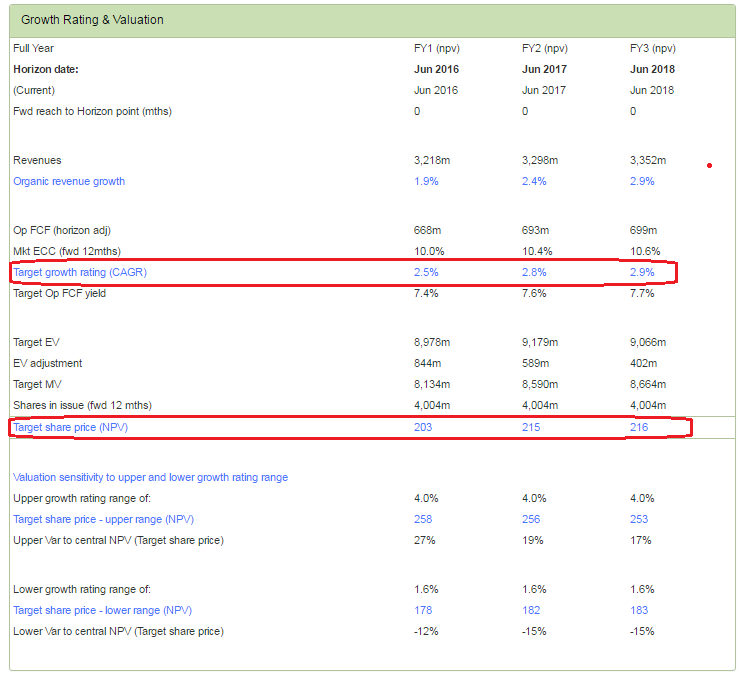 So now let’s turn to the Sensitivity analysis to gauge what could happen if we get either a ‘Leave’ of ‘Remain’ vote. A point to note is that these are market neutral valuations. If you think the FT All Share index could move +/-10ppts, then add or subtract this from the resulting share price valuation.

Taking a screen shot of the Sensitivity analysis summary chart below shows it at ‘rest’ and with our base case valuation scenario as laid out already unchanged and with our target NPV edging just above the close price on Friday.

In the below screen shot we adjust down the marginal revenues by -3ppts pa versus our base case. We are leaving the drop-thru rate (from revenue to EBITA) at the default setting which automatically uses the 10 year trailing average which is currently 55% and not inappropriate for the loss of marginal advertising income going forwards. As can be seen from the below analysis, a -3ppts pa shortfall in revenues knocks around -23% from the valuation which falls to around 160p per share across the three forecasting years. 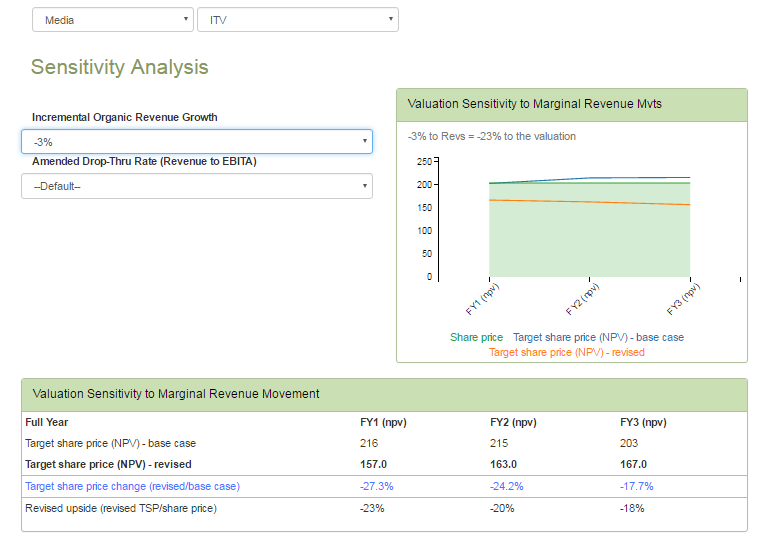 Reverse the assumptions and add an incremental +3ppts to each year’s revenue forecasts and this would add over +30% to the current valuation targets which would rise to over 260p ps for FY1 and to approaching 300p ps by FY3. It should be noted that this analysis incorporates not only a remodelled cumulative Op FCF and EV, but also recognises the impact of skewing organic growth also skews the growth rating within the range. For a full analysis of this please see the GrowthRater ‘Sensitivity’ analysis at https://app.growthrater.com/

This is just one example of how one can use the GrowthRater to help anticipate the impact of events and try and get out ahead of the pack. I have no special insight on the immediate result of the forthcoming referendum, but like the bookies I do not feel the modest lead for the ‘Leave’ campaign in the last poll of only 3ppts when the undecided is still at 13% is anywhere near enough to command a majority in the vote ‘large enough’ to secure Britain’s departure from the EU. I say “large enough”, because although a simple majority is all it normally takes to secure victory in the British system, as we’ve so often with close votes in EU referendums, if these don’t adhere to the establishment’s views are rarely accepted at first instance. While it might lead to a generation of hung parliaments and constitutional crisis, there is no guarantee that a pro-EU parliament would honour a close result in this referendum if it went against them. 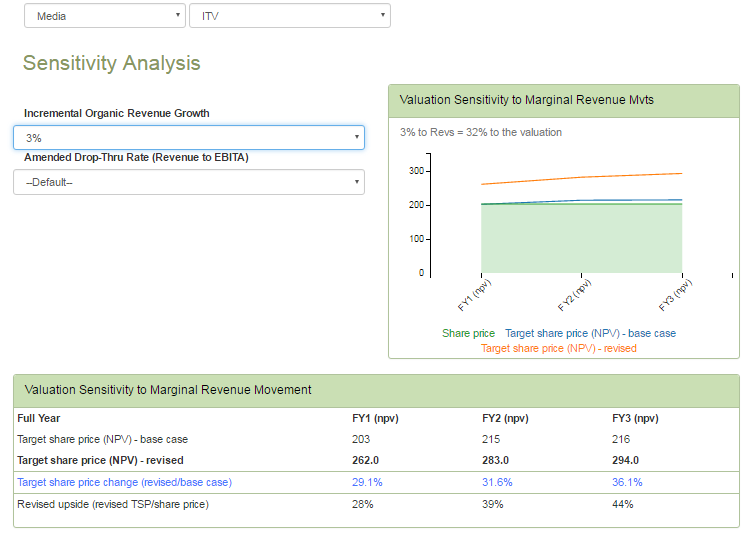 +3ppts pa to incremental revenues = >+30% to the valuation

It may not be resonating with the poll returns, but the wall of cataclysmic forecasts of impending doom from the ‘great and good’, both internal and from our good ‘friends’ from overseas has been successful in unnerving market sentiment. As you will no doubt already be aware, the threats from pulling investment to closing market access has been reflected in both sterling and equity markets.

Currencies: Sterling has weakened against both the US dollar and the Euro as polls have increasingly favoured ‘Leave’. 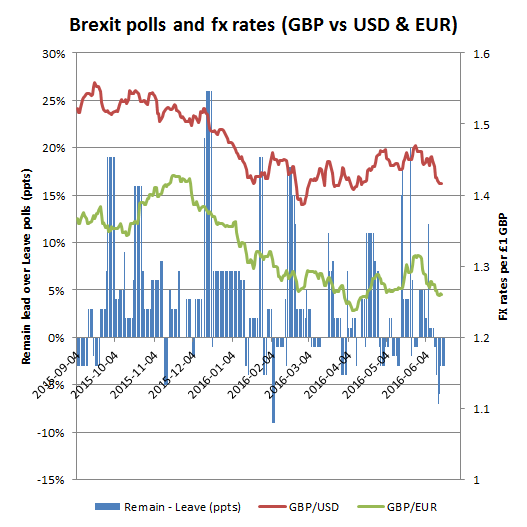 Brexit is bad for sterling

UK equity markets: FT All Share index is down by over -5% (in US $) this month after the recent poll lead by the Leave campaign was announced and since the announcement of the referendum the market is down by over 12% on a US dollar adjusted basis. The sector most at risk from Brexit, but one which we avoid covering at the GrowthRater, are Financials and in particular, the banks which risk being shut out of European financial markets. Amongst our coverage sectors and stocks, the main casualties are those exposed to UK domestic consumption with high rates of fixed overheads and therefore operational leverage (and exposure) to softening marginal revenues. Amongst the UK stocks under coverage, casualties have included retailers (AB Foods, M&S and Tesco), newspaper groups (DMGT and Trinity Mirror), commercial TV (ITV), payTV (Sky), hotels (Whitbread, Enterprise Inns) and gambling (Paddy Power Betfair, William Hill). For some groups (TV and  Newspapers for example) these are already reflecting weaker advertising investment ahead of and probably as a direct consequence of the Brexit vote, while for others, the share price reversal reflect the fear over the future potential impact that an exit from the EU may have. 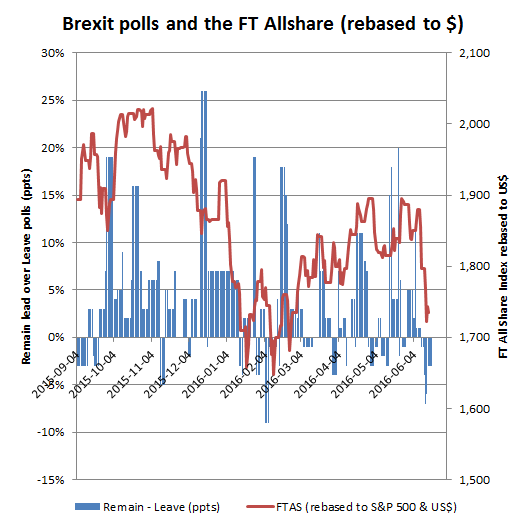 Brexit is bad for UK equities

This is not just a UK problem

It is easy to characterise Brexit as a UK problem, but it is as much a European one. Re-basing three of Europe’s leading equity markets into a common currency (below) shows the extent to which they have all been underperforming the US S&L 500 since the announcement of the UK referendum. While a vote for ‘Remain’ will avert the immediate crisis and no doubt delivery a relief rally, the underlying issues will be less easy to resolve and persist to arise another day. Indeed, many of the issues and not just EU related, but reflect the deep sense of betrayal by the average worker in Europe and the US with institutions that have pursued policies that have merely increased wealth disparities and failed to improved living standards. Draghi is no doubt preparing his monetary bazooka to flood more liquidity into markets, but this is merely to perpetuate disease. If UK leaves, then who next and even if it stays in, will the EU political elite show that they have learnt anything to repair what will be a still very fractured support for their enterprise before the next blow up. 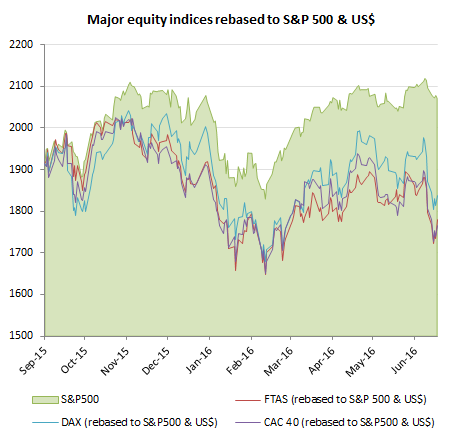 Brexit – a European, not just a UK one for markets

To the victor the spoils?

Low tariffs, offshoring and unrestrained immigration coupled with loose monetary policy has been a great boon to corporate profits and asset appreciation, but not for your average ‘Joe’ who is beginning to understand what trickle-down really means and is not happy.