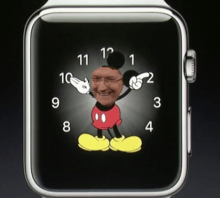 No sooner than IDC release estimated data for the top 5 global ‘wearable’ devices for the Q3 showing a -71% collapse in Apple Watch shipments for the period (see table below), than Apple’s CEO Tim Cook jumps straight back in with one of his now infamous selective disclosures to the press to talk the product up. According to the likes of CNet and Reuters a couple of hours ago, Tim Cook is claiming that Apple Watch sales are “Hot” and “Sales growth is off the charts. In fact, during the first week of holiday shopping, our sell-through of Apple Watch was greater than any week in the product’s history. And as we expected, we’re on track for the best quarter ever for Apple Watch,” he said.  Are sales now good enough for Mr Cook to provide actual sales data or perhaps even put out an official SEC release or even a quick confirmation on the Apple website? – Clearly not!

Apple predicting a “record” Q4 – which is just as well!

One has to ask, what is the intended purpose of these adhoc and selective disclosures of qualitative sales commentaries to press outlets. Are they meant to be price sensitive, because previous similar disclosures clearly were. If so, then at the very least they should be released as per RegFD (fair disclosure) for all investors to get as well as make it a point of record on which the CEO can be held to account with later should there be any ‘misunderstanding’. The weak sales in Q3 can be partially explained by the late launch, in September, of the new second generation and now waterproof Watch, which looks to have deferred sales out of that quarter into the current one. At the very least it would seem that one should aggregate the last two quarters of the year to get a more representative sample of how this product is faring, but of course that would require some hard numbers to be disclosed by Apple.

I can well understand Mr Cook’s eagerness for the Watch to be a success, given his more personal involvement with the project, although starting at $369 and with limited functionality without an iPhone and looking like something out of Dick Tracy, it doesn’t look like the next big revenue driver for Apple to take over from the iPod, Mac, iPad and current iPhone winners.

This year, Apple has been blessed by a number of positive events, albeit all extraneous rather than things that management can take credit for. The most spectacular was their principal competitor literally blowing up, with the well publicised Samsung Note 7 battery problems that removed from the market what was a very serious and powerful competitive product at a time when Apples new iPhone 7 seemed like a stop-gap before the more eagerly awaited iPhone 8. Then we’ve had the election of Donald Trump, which while challenging Apple’s offshore assembly, also promises to cut corporate tax rates and more importantly offer tax concessions for the repatriation of overseas cash.  In terms of their own product innovation however, I’m not particularly impressed. At one point I thought the new iPad Pro might be interesting with access to microsoft excel, but then discovered the device won’t even run VBA, which in my field certainly doesn’t make it a suitable professional device and still just for hobbyists. 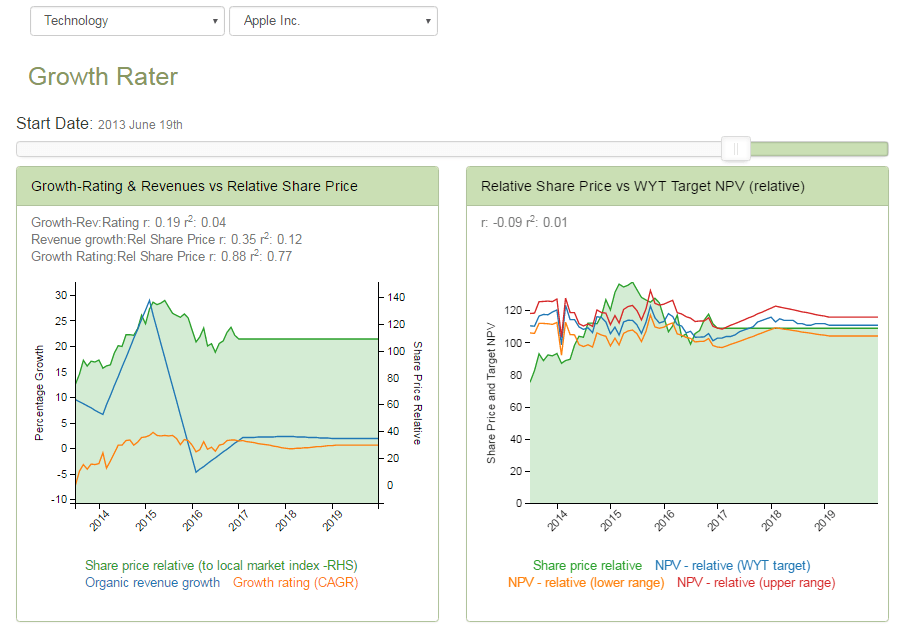 From the GrowthRater webApp